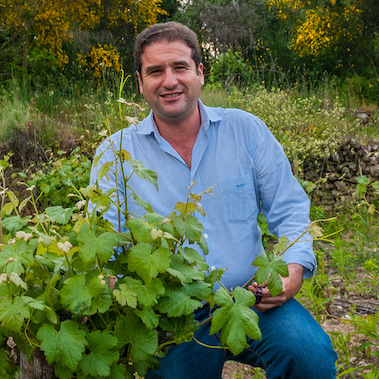 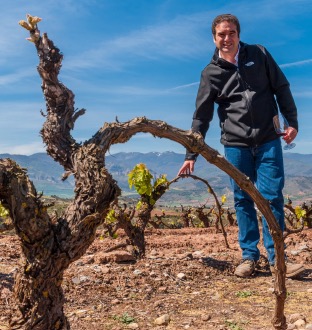 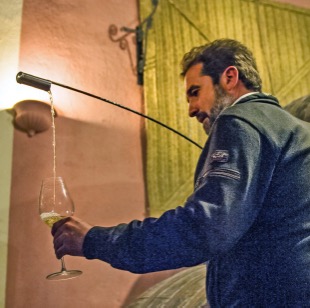 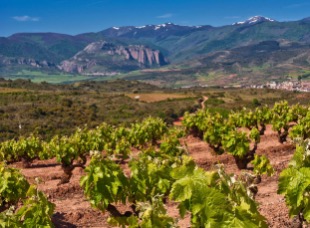 Alberto Orte in the Vineyard 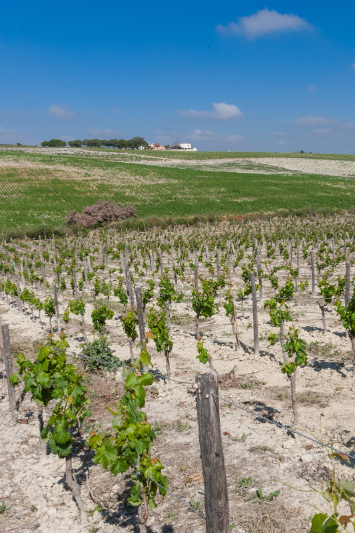 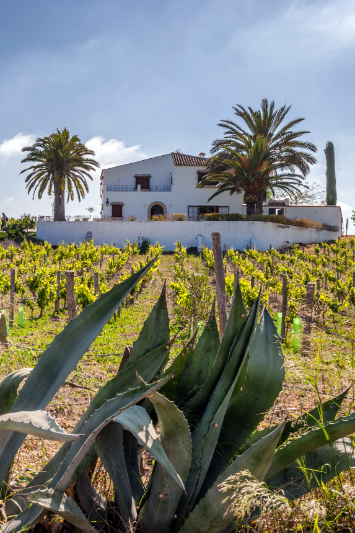 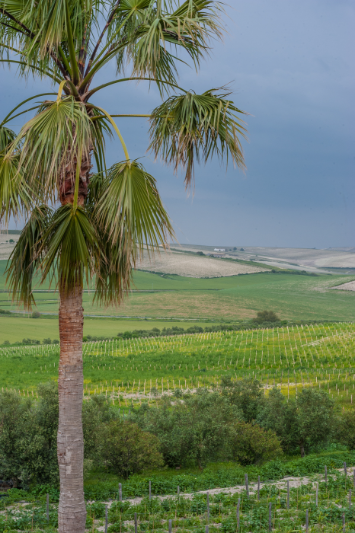 Alberto Orte is a force to be reckoned with, producing truly compelling and ambitious wines that have firmly established him as one of the most talented up and comers of the next generation of Spanish winemakers. In addition to co-founding Olé & Obrigado, Alberto has also dedicated a huge portion of his life to discovering great terroirs, resurrecting ancient clones, and replanting nearly extinct grape varieties that would otherwise be lost to modernity. Alberto produces wine in many regions throughout the Iberian Peninsula, most notably in Jerez, Valdeorras and Rioja.

Alberto believes that low yields, balanced soils, and top-quality raw materials are three fundamental factors to creating terroir-reflective and balanced wines. He produces two types of wines: wines of unique terroirs, which are labeled as Alberto Orte, and wines from village- designated vineyards that are more approachable, which are labeled as Vinos Atlántico.

Born in Madrid to a viticulture and winemaking family, Alberto Orte always took an interest in Spain, its natural resources, and its wine. As a teenager, Alberto would spend his days picking grapes with his cousins and working at his family’s winery in Montilla Moriles. After studying law at the University of Madrid, Alberto partnered with Patrick Mata at the young age of 24 to create Olé & Obrigado. Shortly thereafter, Alberto pursued a master’s degree in viticulture at the Universidad Politécnica de Madrid. While Patrick handles the marketing and business aspects of their business in the United States, Alberto keeps his roots in his native Spain, where he selects, vinifies, and produces an array of Spanish wines. Today, Alberto lives with his family in El Puerto de Santa Maria (Cadiz) in Jerez with his wife and six children.

Alberto is somewhat of an anomaly, as he is a farmer, producer, and historian all in one. He approaches his vineyard sites with the past in mind and aims to apply lessons to modern day. “I like to observe and understand how different regions tended their vineyards in the past,” he says. “Not to replicate these methods, but to understand and create my own conclusions of what is the best farming approach to each region.” Today, Alberto currently owns 16 hectares of vines in Jerez. He also purchases fruit and rents vineyard sites in the Sil and Bibei riverbanks in Valdeorras, Campo Arriba in Yecla, and Sierra de la Demanda in Rioja.

Alberto’s main contribution to the world of Spanish wine is his revival of nearly extinct local varieties, showing the true potential of grapes like Tintilla and Vijiriega. In Jerez alone, Alberto has identified 200+ old clones and 22 forgotten varieties. Alberto also has a passion for old vines, as these plants tend to produce low yields of concentrated and thought-provoking fruit. When searching for sites to work with, Alberto favors high-altitude vineyard plots with deep soils.

Alberto’s dedication to the preservation of special vineyards and varietals forms the backbone of his efforts around sustainability in viticulture and winemaking. A true farmer at heart, Alberto is fervently passionate about organic farming, choosing to add beneficial cover crops like clover in the vineyards, which he surrounds with naturally pest-repellant hedges of rosemary. He experiments with biodynamic principles in some of his vineyards, which (in stark contrast to neighboring sites) flourish with worms, pollinators, and other forms of life. By protecting the soils, he ensures that his patient work can continue for generations to come. Instead of extracting resources, he conserves them, utilizing dry farming techniques instead of irrigation, which is essential in drought-prone areas across Spain. His new winery at El Aljibe (Cádiz) is powered by geothermal energy; inside the winery itself, he uses an organic approach, allowing his impeccable fruit and terroir to shine through in the final product, unmarked by adjustments and chemicals.

Alberto is a humble man of few words, yet his winemaking hand is meticulous and precise. As a producer, Alberto’s work is vineyard-specific and vinification decisions depend on each particular vineyard’s climate, soil type, and grape variety. However, his overarching principles always remain the same. “My objective is to craft wines of complexity, wines that are balanced and elegant,” he says. “Wines that are drinkable upon bottling but also age worthy. I do not seek power, exuberance, or forcefulness.”

He uses native yeasts for fermentations and works with a variety of vessels (concrete, foudre, stainless steel and large format used wood) to vinify each of his wines, depending on the needs of the specific variety. While some wines are aged up to 8-9 years, like La Antigua Clásico Reserva, some see 18 months or less. When working with grapes that are less tannic, Alberto likes to work with cement tanks because they provide more structure on the mid palate. He incorporates newer oak with grapes that are more tannic, while favoring older oak barrels or cement for more delicate varietals.

Alberto’s work in Jerez is not only focused on making biological and oxidatively aged wines at the Poniente Winery but also dry whites and reds under the Atlántida and Vara Y Pulgar labels. All vineyards are organic. He does not till the soil, encourages insect diversity to prevent disease, does not use any insecticides, even if allowed by regulations. Vara Y Pulgar refers to a pruning system used for an ancient method of trellising vines in the Jerez region. He uses traditional techniques and biodynamic principles to enhance the soil, for example including compost from grape skins and canes from the prior harvest.

In Sierra de la Demanda, which is one of most historic yet unknown subzones of Rioja, Alberto works with ancient vines and clones of Garnacha and Viura. The soil here is composed of silica and limestone, which is very rare in Rioja. Vines tended in this soil exhibit a purity of red fruit and minerality that is extremely unique to this microclimate. When planting new vineyards, Alberto selects cuttings from old vineyards to maintain the genetic diversity of this terroir. Most of these vineyards are managed manually and without the use of a tractor. Harvest is late and often lasts into November. Long- cycle grapes, like Garnacha and Viura, shine in this specific high-elevation terroir of Rioja, which makes remarkable, age worthy wines.

In Valdeorras, Alberto works with a few local farmers who own parcels of old vine Merenzao (Trousseau), Mencia and Garnacha Tintorera (Alicante Bouchet). These parcels are miniscule, so production is extremely small. The steep parcels that produce Escalada Do Sil and Escalada Do Bibei are located along the riverbanks of the Sil and Bibei rivers. Most of the surrounding vineyards have been abandoned, leaving them isolated and surrounded by forests and wild herbs. These vineyards are so remote and steep that tractors cannot access the vineyards, thus all work is done manually. These sites are unique pieces of history that produce one-of-a-kind wines from a territory that is almost extinct. All the work in these vineyards is done organically and following biodynamic principles. In order to preserve the clonal identity of each site, Alberto replants each dead vine with genetic material from that corresponding site.

In Yecla, Alberto works in the highest part of the region, a territory that is known as Campo Arriba which is the coolest part of Yecla. The region’s greatest concentration of pure chalk soil is found here. Additionally, this subzone is where one finds the region’s oldest Monastrell vines. These vines are directly planted on ungrafted rootstock which have never been touched by phylloxera. All the vines here are dry-farmed, organic, and trellised using the Vaso system (head-pruned).

“We’ll keep you in the loop about future events, winemaker tastings, recipes, new releases, travel guides and other occasional updates.”

We’ll keep you in the loop about future events, winemaker tastings, recipes, new releases, travel guides and other occasional updates